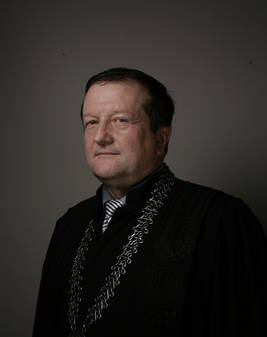 Damir Boras, rector of the University of Zagreb since 2014, university professor with tenure, information specialist, and lexicographer. He is born in Zagreb (1951) where he graduated from the Classical Grammar School (1970) and obtained master degree from the Faculty of Electrical Engineering (1974). He obtained Ph.D. at the Faculty of Humanities and Social Sciences in Zagreb with the dissertation "Theory and rules of text segmentation in Croatian language" (1998). He is also professor with tenure at the Faculty of Graphic Arts (since 2017) and at the Faculty of Teacher Education (since 2017) at the University of Zagreb, and for last seven years also guest professor at the Information science study of the Faculty of Humanities, University of Mostar in Bosnia and Herzegovina. He worked as a computer and information specialist at the Referral Centre of the University of Zagreb (1975-1984), then from 1984 to 2014 as a research assistant, assistant professor (1999), associate professor (2003) full professor (2006) and full professor with tenure (2011-2014) at the Department of information science of the University of Zagreb Faculty of Humanities and Social Sciences where he was the head and founder of the Chair of natural language processing, lexicography and encyclopaedic science (2004-2017). In more than a hundred and forty published scientific and professional papers and several scientific books, textbooks and encyclopaedias, he deals with computer processing of the Croatian language, natural language processing, e-education, knowledge organization, computer lexicography and encyclopaedic science. He has led or participated in several professional projects for the application and introduction of IT technologies in higher education, secondary and primary education, libraries, publishing houses and judiciary. During his career he won many awards and acknowledgements, including full membership  of the European Academy of Sciences and Arts in the field of Humanities (Academia scientiarum et artium Europaea) in 2019.