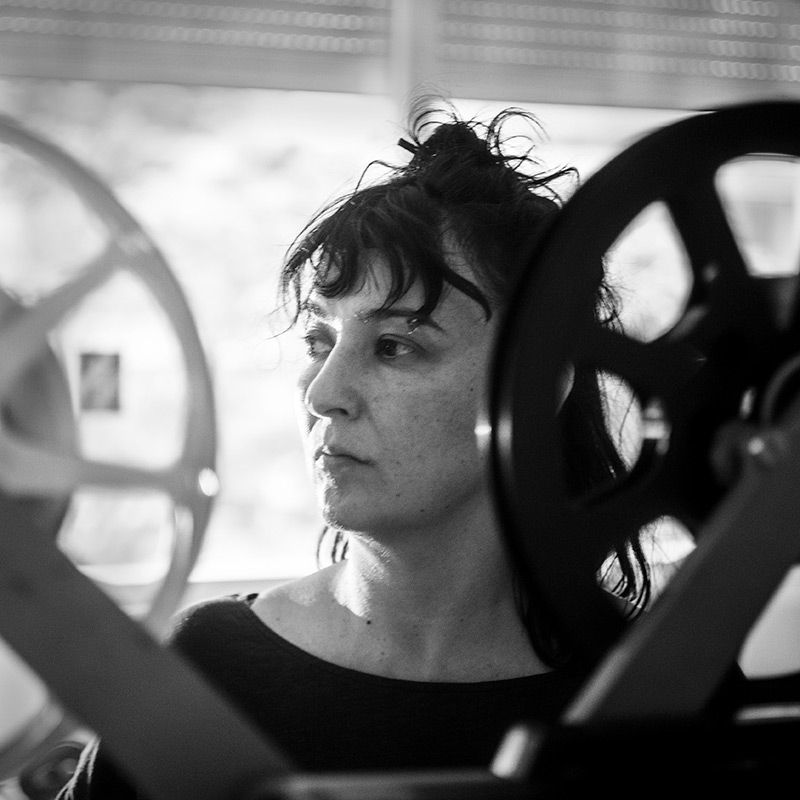 Graduated in Media and Audiovisual Studies at the Universidad Complutense de Madrid (UCM). She continued her studies attending to several seminars and workshops with lecturers and artists such as Javier Vallhonrat, José María Sanchéz-Verdú, Francisco López, Joan Fontcuberta, Bruce McClure, Enric Mira, Thomas Bachler, Joan Morey and Llorenç Barber among others. These additional studies had led her to focus her attention towards the fields of cinema, photography, philosophy, and music. As an artist, Deneb Martos has specialized in cameraless photography and experimental cinema. Since 2003 she is head and teacher of the Analogue and Digital Photography Department of the cultural centre La Casa Encendida in Madrid.  She was appointed director in 2015 of Los Laboratorios, and has coordinated different courses and workshops, as well as in other institutions such as La Fábrica – PHE (PHotoEspaña) ,Instituto Cervantes,  and LENS Photography School. She has tutored, guided and coached countless photographic and artistic projects and coordinated the stand of Los Laboratorios at LibrosMutantes – Madrid Art Book Fair, also held in LCE since 2010. Since 2018 she is co-partner of LAV. She has shown her photographic and cinema work in several occasions such as during the concerts of Terry Riley, Alvin Lucier and Alvin Curran within the music programme The limits of composition? at LCE (2008) and II SlideLuck Madrid (2009); Monat der Fotografie Off and Festival KONTAKTE ’17- Biennial for Electroacoustic Music and Sound Art at Akademie der Künste(Berlin, 2014 and 2017), the programme Vanguardias Live at FilmadridFestival and Instante Fundación; Festival RAYO (Madrid, 2019 and 2020).

Lately she has worked as a projectionist and performer for the LAV-Screenings atCírculo de Bellas Artes (CBA, Madrid), and for the artwork ‘Film Lexicon of Sexual Practices’ by installation artist Maria Eichhorn . To see some of her work